The Story Of Stagecoach

This rugged terrain first made history in the 1800s, when the gentleman bandit Charles Earl Bowles, known as Black Bart, robbed the daily stagecoach that traveled over the hill from St. Helena to Monticello. Early German settlers discovered the well-drained soils and perfect growing conditions, and their grapes brought some of the highest prices in the Napa Valley. Soon a nearby luxury mineral spa was attracting visitors from San Francisco and beyond. But by the early 1900s the increased deer population devastated the vineyards and by Prohibition viticulture was abandoned on these hills.

In 1991, Dr. Jan Krupp saw an ad in the San Francisco Chronicle selling a Napa Valley property with good water and soils. His interest grew when, on his first site visit, he noticed a few old vines, perhaps 100 years old. With the help of a few good friends, he began developing the property in 1995, defying what many local experts had claimed was an impossible task. It took seven years to clear more than one billion pounds of volcanic rock.

Then there was the issue of water, which hadn’t yet been found on the arid land. Jan hired a world-renowned geologist, who identified five potential locations. Drill to 300 feet, he advised, and when no water was found he recommended against purchasing the property. Instead of quitting, Jan hired a “water witch” who walked the property with her apparatus of two copper divining rods, stopping abruptly at one spot. Drill here, she said. At 400 feet, an underwater stream was found, as well as water at the five places identified by the geologist, but at the witch’s recommended depth.

In 2016, the E. & J. Gallo Winery purchased Stagecoach Vineyard. Today, with over 600 acres planted to vines, the Cabernet-focused Stagecoach is the largest contiguous vineyard in the Napa Valley. The 1,300+ acres of rocky, volcanic terroir extends from the south-eastern of Pritchard Hill area overlooking Oakville and Yountville to the westernmost regions of the Atlas Peak appellation.

In addition to its stature as a premium vineyard, Stagecoach’s rugged beauty is home to several indigenous flora and fauna. Among the sprawling acres of thriving vines and volcanic chaparral slopes are the gnarly remnants of an old vineyard created by the area’s first settlers. And the storied Water Witch’s Well lies near the vineyard entrance to Stagecoach Vineyard, evidence of the powerful union of luck and perseverance that made this place possible. The spirit of Black Bart – who intimately knew and rode this verdant backcountry – is clearly still at home. (from stagecoachvineyard.com) 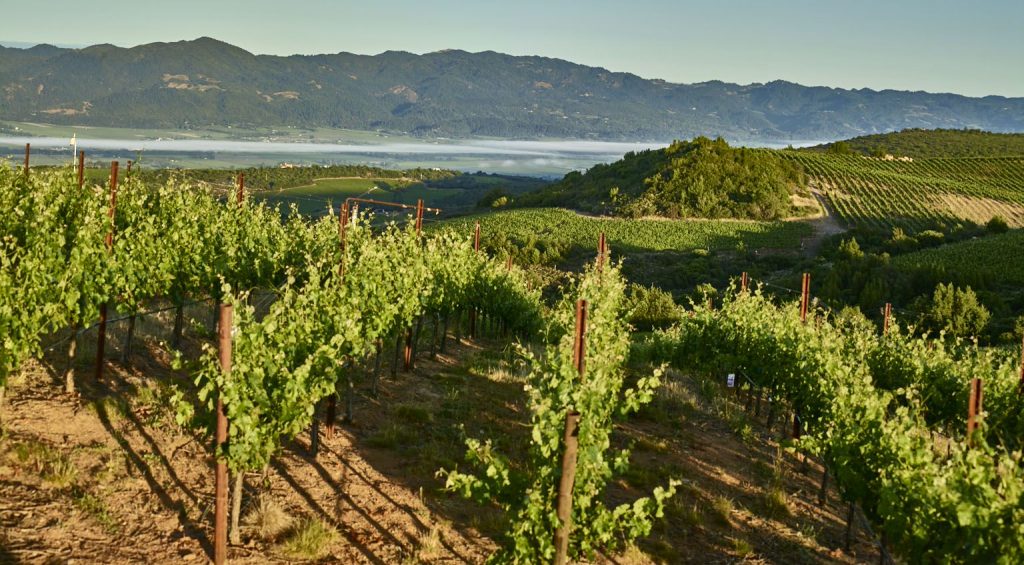 When asked to describe the Stagecoach Vineyard, we first respond with a two-word answer: “Extreme Terroir.” The word “extreme” applies not just to our steep hillsides and mountain-top geography, but also to the extreme levels of meticulous attention paid to growing the fruit and the extreme, intense flavors that result. We use “terroir” in the true French sense, invoking the special characteristics that geography gives to grapes, including soil, climate, and farming techniques.

Our elevations – ranging between 1,100 and 1,750 feet – make Stagecoach the largest south-facing mountain vineyard in Napa. Our mountain terrain is usually above the fog which gives us a longer ripening season, with the rockiest soils and minerality to create distinct aromas and flavors that can only be found in the unique terroir at Stagecoach Vineyard.

The vineyard covers an enormous number of soil depths, soil types, and micro-climates, with 16 different varietals planted in 204 individual blocks being purchased by 80+ different wineries. Given the quality level that is expected from each of our clients, it’s really more like farming 205 small vineyards than a single large one. Stagecoach is Cabernet Sauvignon-focused, with over half of the vines planted to 22 Cabernet clones.

Just look at the grapes themselves. Stagecoach consistently produces an amazing color to its fruit – largely due to the elevation above the fog layer, which exposes the vineyard to increased sunlight throughout the year. As a result, our fruit is dominated by classic “mountainside” characteristics, with big tannins and extremely complex flavors. (from stagecoachvineyard.com)

You must be 21 or over to enter this website.